Kız Kalesi (Maiden’s Castle)  which is one of the most important touristic values of Mersin and can be described as the symbol of Mersin, is a castle built on an island 600 meters off the coast. The ruins, formerly called Kyrkos, gave its name to the town where it was located over time.

In the region, which is a very old settlement, there are two castle ruins one  on the sea and  one on the land. The perimeter of the castle on the sea is 192 meters and it has 8 towers.

There are many historical ruins, especially the church, cistern mosaic, aqueducts, and rock tombs are important.

The first settlement in Kız Kalesi dates back to the 4th century BC. Since Kız Kalesi is seen as an important trade base, it has been dominated by many civilizations throughout history. Seleucus, Rome, Byzantium, Anatolian Seljuks, Armenian Kingdom of Klikya, Karamanoğulları and Ottoman Empire ruled here respectively. With the aqueducts built during the Roman period, water was brought from the Lemas Stream, making this an important settlement. In order to prevent the attacks of pirates, it was surrounded by walls over time. II. Cem Sultan, who lost his struggle for the throne against Bayezid, first took refuge in the Karamanoğulları, then stayed here for a short time before the Knights of Rhodes took  him..

The Legend of Kız Kalesi

The legend of Kız Kalesi is similar to the legend of the  Kız Kulesi (Maiden's Tower) in Istanbul. According to the legend of Kız Kalesi, the King of Kyrkos had a daughter whom he loved very much. One day, he asked a fortune teller to look at his daughter's future. The fortune teller, looking at the girl's hand, startled and told the king that a snake would bite her and she would die. The king, who was very upset about this, had a castle built on an island near the coast and settled his daughter there. A snake hiding in a grape basket sent to the island killed the girl. “Kız” means “Maiden” and “Kale” means “Castle” in Turkish. The castle took its name from this legend.

How to go to Kız Kalesi? Directions Information

Kız Kalesi is located in Erdemli District of Mersin, and its distance to Erdemli is 23 km and to Mersin is 60 km.

Since Kız Kalesi is located on the Mersin-Antalya road, it is extremely easy to reach by private vehicle or public transport. Mersin-Antalya and Mersin-Konya intercity buses can be preferred to go to Kızkalesi (name of the location also), as well as cooperative minibuses departing from Mersin and Silifke.

When to go to Kız Kalesi? What to do there?

Since Kız Kalesi located in the south of Turkey it has a very long sea season and  can be visited for 6 months from mid-April to the end of October for sea tourism. For cultural tourism purposes, it can be visited in 4 seasons. There are 2 beaches on the coast, one 1200 meters and the other 300 meters long. One of the most important features of the sandy beaches is that they do not get too deep even when you open 50 meters from the shore. With this feature, it is preferred for families with small children.

On the beach of Kızkalesi, services such as umbrellas, sun loungers, WC and showers are provided. Visitors can rent a pedalo and canoe to reach Kız Kalesi from the shore, or they can go to the island where the castle is located by boat. The area around the island where Kız Kalesi is located is very rich in terms of sea creatures, and we recommend that tourists who go here have sea goggles and snorkels.

There are many hotels, hostels, restaurants and shopping centers in Kızkalesi, and every opportunity is available to meet the needs of visitors.

We recommend that visitors to Kız Kalesi try the local fish and seafood at the fish restaurants in Narlıkuyu and the local breakfast at the businesses located near Heaven and Hell Potholes.

Places to be seen around Kız Kalesi 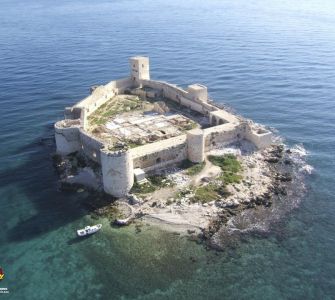 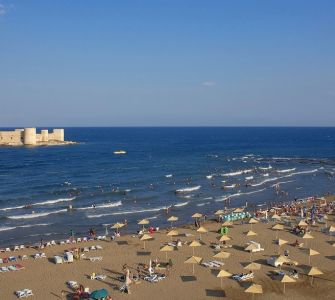 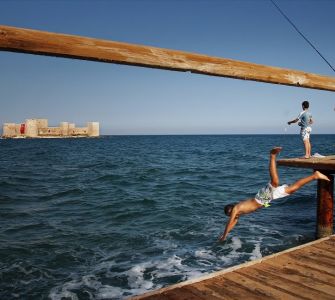 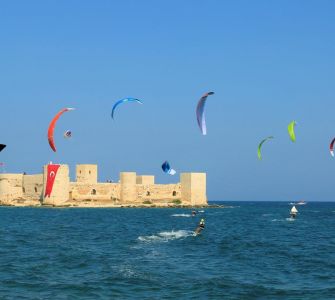 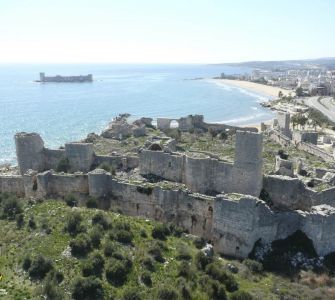