Tarsus Zoo was formerly located in the park in Tarsus Town Center. It was moved to its new location around the Tarsus Dam on December 27, 2013, the anniversary of the liberation of Tarsus, due to reasons such as the animals cannot be exhibited in narrow cages in a healthy environment and the visitors are uncomfortable due to the small area. Later, its name was changed to Tarsus Nature Park.

Providing service on an area of 110 decares, Tarsus Zoo is of ideal size in terms of its spread area. It is large enough for animals to roam freely in their natural habitats, while at the same time it is not too large for visitors. The visitors can wander around without getting tired and losing their way.

In Tarsus Zoo, animal species are classified in a certain order, and it is possible to visit without getting lost or missing any animals, thanks to the guiding signs. Again, in front of each animal species, there are signs containing explanations about its family and biological characteristics.

The ideal time to visit Tarsus Zoo is relatively early in the morning and in the afternoon. Because in hot hours, some animals with large cages like lions enter their huts in the shade and therefore it is not possible to see them at that time of the day.

Tarsus Zoo is a group B (with 69 or less animal species) zoo, and efforts are underway to raise it to the status of a group A (with 70 or more animal species) zoo. Zebra was introduced as a new species in 2018. Negotiations continue with Gaziantep Zoo officials to bring especially elephants and giraffes.

The animals in Tarsus Zoo can be listed in 4 groups:

Reptiles: Anaconda, crocodile, turtle and snake varieties are exhibited in the aquarium.

Fishes: There are dozens of different types of fish, as well as wild species such as piranha.

The entrance fee to Tarsus Zoo is 8 TL for civilians and 4 TL for students. Admission is free for those under 6 years old. In order to get a student ticket, a student ID is required.

Students can enter Tarsus Zoo free of charge on some special days such as April 23, National Sovereignty and Children's Day and October 4, and on holidays such as semester breaks.

Where is Tarsus Zoo? Directions Information. How to Get to the Zoo?

Tarsus Zoo is located in the Tarsus District of Mersin, just south of the Tarsus Dam. It is 7 km from Tarsus town center and 32 km from Mersin.

To get to Tarsus Zoo from Mersin, you can use the Adana-Mersin highway (D400). After entering the Tarsus Town Center, and follow the signs that direct you. You will reach the Tarsus Toy Garden and the Tarsus Zoo right after it, after proceeding in the north direction from the center of Tarsus and following the Blue Boulevard (the road that goes along the canal) in the east direction.

To go to Tarsus Zoo by public transport, you can use the Dam line buses of Tarsus Municipality after reaching Tarsus town center by bus or train.

Places to be seen around Tarsus Zoo

The distance of   Tarsus Zoo to  Tarsus Centre is nearly 2  nearly 7 km. When you reach old Tarsus all historical places listed respectively as, Makam Mosque,  Ulu Mosque, Kırkkaşık Bedesten , Kubatpaşa Madrasah, St Paul Memorial Museum,  Cleopatra Gate, Tarsus Museum, Ancient Roman Road, St. Paul's Well,  and Old Tarsus Houses  are all within walking distance. Our advice to visitors who come Tarsus  by private vehicle, to leave their vehicles in a suitable place and visit all these points on foot. They will have had a pleasant time full of history from the ancient period  to Turkish Republic. 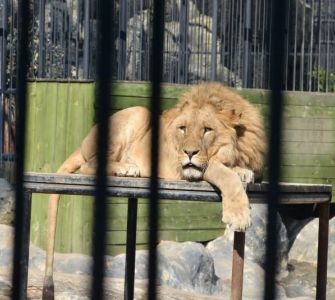