Kanlıdivane is a historical place   consisting of historical buildings around a sinkhole, which dates back to the 4th century. Here, It is possible to see traces of Hellenistic Period, Rome; Byzantine and Ottoman periods. It also hosts national and international music events and concerts due to its excellent acoustics.

The ruins of Kanlıdivane consist of a sinkhole that is believed to be sacred around and religious places, houses, roads, olive oil production workshops, cisterns, tower and necropolis around it. These pits, which we call Obruk in Turkish are formed by the collapse of the cavities formed under the ground over time due to the erosion of the chalky layer in the Central Taurus. The Heaven and Hell Sinkhole in the same region and the Aşağı Dünya Sinkhole, which isnewly opened to tourism, are the best examples of these formations.

The ruins of Kanlıdivane have come to the fore with the olive oil production in time, as well as the towers and religious structures built around this pit, since this pit is considered sacred. Due to the sudden emergence of the pit, it is thought to be sacred and according to pagan belief, this place is considered the center of the world. It was believed that the priests would reach the Mother Goddess from here and learn about the future. The pit used to be descended with a ladder carved into the rocks, but today it is not open for descent. On the walls of the 100 meters wide and 60 meters deep sinkhole there are reliefs carved in memory of the kings.

The Necropolis (grave area) of Kanlıdivane is also one of the important points to be seen. Due to the scarcity of arable land in this region, instead of burying the dead; tombs were carved into rocks. The fact that they were made with master stonemasonry ensured that these are structures that have not been demolished until today. In the following periods, this area was also used as a burial place by the Turkmens.

The Story & Legend of Kanlıdivane

According to the first legend, the sinkhole next to the here was called the Kanlıdivane because the criminals were thrown and fed to the lions in it.

According to a second narrative, the city's name, was derived from ancient name Canytellis, and became Kanlıdivane by time.

According to another narration, it was named Kanlıdivane after the scattered Turkmen tribes living in the Taurus Mountains held their divans (meetings) here and the pothole next to it was painted red with rain water.

There are four basilicas around the Sinkhole, showing that this place is considered sacred. There are basilicas 1 and 2 to the west of the building, and basilicas no. 3 and 4 to the northwest. The best preserved of these is Basilica No. 4, which is seen as the symbol of Kanlıdivane. During the excavations carried out in 2011, traces of the of Basilica No. 5 were found. Again, during the Byzantine period, this place was considered important by the Christians and churches were built.

The entrance fee to Kanlıdivane is 12.5 TL and the museum card is valid.

Places to be seen around Kanlıdivane 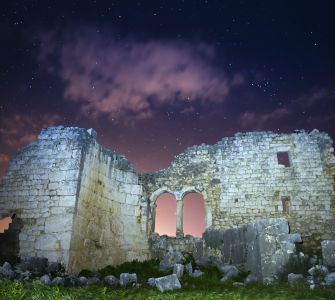 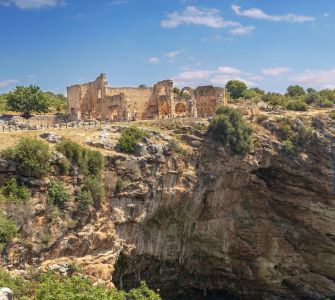 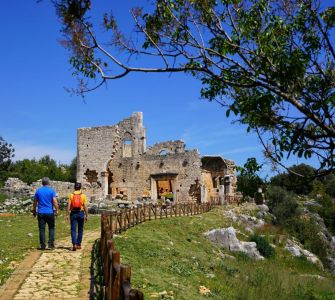 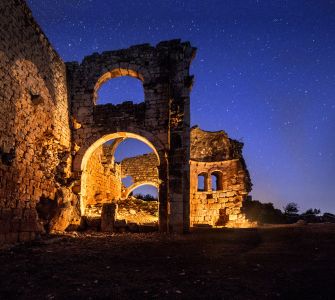 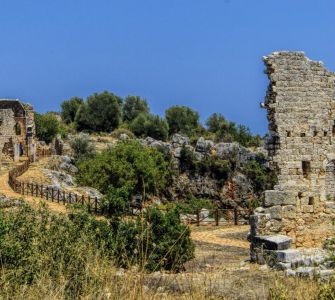