Ulu Mosque is one of the most beautiful examples of ulu (ulu means great inTurkish)mosque tradition in Anatolia and Islamic states. Ulu mosques were seen in every city and they were important places preferred by state officials especially for Friday prayers. Ulu mosques are usually named after the people who built them or the city in which they are located. After the conquest of a new city, it was common practice to immediately build a large mosque in the city, as well as converting the largest prayer hall there into a mosque. These structures have taken as an example the flat roof-shaped buildings with covered courtyards and columns due to the hot climate of the early Islamic geography.

Tarsus Ulu Mosque, also known as Cami-i Nur, was built entirely of cut stone. With the effect of the hot climate courtyard of this building was kept wide and supported by columns. The building is entered through the crown door in the north. One of the most visible places of the mosque is this door, which reflects the Mameluke style with its black and white marble flooring. In the courtyard, the interior of the mosque can be entered through 5 different doors. It is possible to see the traces of different cultures in the mosque, since the Ramazanoğlu Principality, which built the mosque, was formerly attached to the Mameluke State and later came under Ottoman rule.

In the eastern part of the Ulu Mosque, there are the tombs of the Prophets Shit and Luqman, as well as the tomb of the Abbasid Caliph Memun, who is known to have died in Pozantı.

Tarsus Ulu Mosque was built in the Abbasid period, after the death of Caliph Memun, where his grave was located here. When the region was captured by the Byzantine State, this building was also converted into a church. It is known that the final version of the building was built on a church. As it is understood from its inscription, the mosque was built in 1579 by İbrahim Bey, son of Ramazanoğlu Piri Pasha. The minaret, which rises independently from the mosque, was built by the Mameluke ruler Şembeki Aksungur.

The clock tower added to the Ulu Mosque in 1895 and the fountain added in 1906 gave the building a different and original appearance. In order to meet the expenses of the mosque, the income of Kırkkaşık Bedesten, which is right next to it, was donated here. The mosque was last restored in 2008.

Where is Tarsus Ulu Mosque? Directions Information. Going to the Mansion?

Ulu Mosque is located in a very central location in Tarsus and after reaching Tarsus Town Center by private car, it is recommended to see it together with other historical and touristic places within walking distance. As for public transportation, it is at a point that can be reached by all minibuses and buses.

Places to be seen around Tarsus Ulu Mosque

Tarsus Ulu Mosque can be seen as the center of old Tarsus. In addition to the Kırkkaşık Bedesten and Kubatpaşa Madrasah right next to it, the Makam Mosque, St. Paul's Well, Saint Paul Church, Cleopatra Gate, Old Tarsus Houses, Ancient Roman Road  and Tarsus Museum are all within walking distance. Our advice to visitors who come Tarsus  by private vehicle, to leave their vehicles in a suitable place and visit all these points on foot. They will have had a pleasant time full of history from the ancient period  to Turkish Republic. 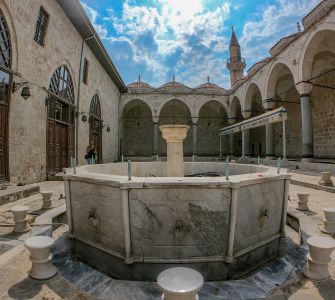 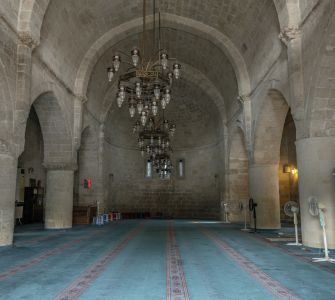 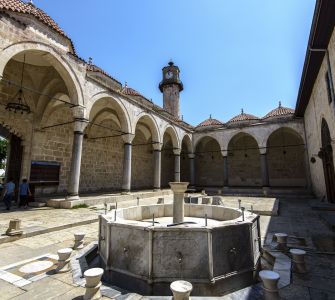