Uzuncaburç, is the most important ancient city of Silifke .It was formerly known as Diocaesarea, and was the worship center of the Olba Kingdom that dominated the region during the Hellenistic period. In the Ottoman period, both the ruins and the neighborhood are called as Uzuncaburç because of  the the Hellenistic tower in the ruins here. Since  “uzun” means “long” and “burç” means “bastion” in Turkish.

One of the most important and remarkable structures in Uzuncaburç is the temple of Zeus (Olbios) in the style of peripetros (surrounded by columns). It is known that this structure, which is one of the oldest and most magnificent of the Zeus temples,in Anatolia, was built by Seleukos Nikator I, one of the generals of Alexander the Great. The reliefs and stonework on the columns attract particular attention. It is thought that the 36 columns around the Temple of Zeus were made of stones that were not found in the region and therefore were brought from far away to make this structure. With the changes made on the temple during the Byzantine period, this place was converted into a church.

Although the history of the ancient city of Uzuncaburç dates back to the Hellenistic  period with its 2500-year history, it is thought that this place was considered sacred during the Hittite period. Another aspect that makes Uzuncaburç special is that it is the only flat place in a mountainous area at an altitude of 1300. In this way, temples are built here starting from the Hellenistic period, and this place develops further and becomes a city in its own right. The importance of this place continues during the Roman Empire period and the columned street, monumental fountain and entrance gates are added.

Another remarkable structure of Uzuncaburç is the theater with a capacity of 3000 people built by the Roman Empire. The theater, which has been well preserved until today, has a very high capacity for a structure in a remote place, far from the sea and trade routes. This is a detail that shows how important the city was at that time.

Since Uzuncaburç is a sacred religious center, the Necropolis (grave area) is also of great importance. There are thousands of burial places carved into the rocks here. Due to the scarcity of arable land in this region, instead of burying the dead; tombs were carved into rocks and this ensured that they remained intact until today. All of these tombs contain a different craftsmanship and art.

The Tyche (luck) Temple is also an impressive structure in Uzuncaburç, rising on 5 columns with a height of 6 meters. It is known that this temple was built by the nobles of the city, Ppius and his wife, Kyria.

The watchtower at the entrance of the city also shows the importance of Uzuncaburç. Like this, 5 towers that are in a position to see each other can monitor the sea and instantly inform the city of an attack from the sea.

Diocaesarea Victory Gate, located in the east of the city and built by the Romans, is a well-preserved structure rising on 5 columns.

Uzuncaburç is 30 km far from Silifke and 103 km far from Mersin; It is located within the borders of Uzuncaburç District. To get from Mersin to Uzuncaburç, you can  follow the Mersin-Antalya highway in the west direction and turn north from Limonlu Town, pass the villages of Esenpınar, Sömek and Yeğinli, respectively.

There are busses departing from Silifke to Uzuncaburç 3 times a day.

Places to be seen around Uzuncaburç Ruins 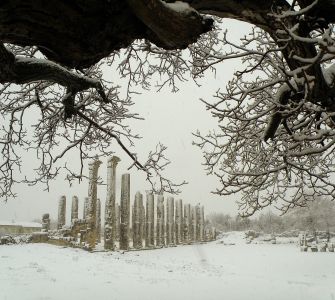 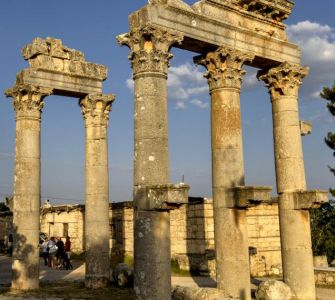 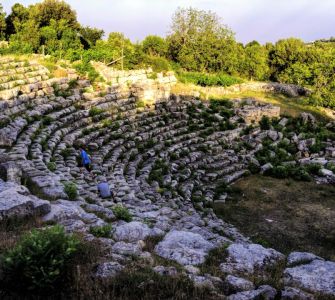 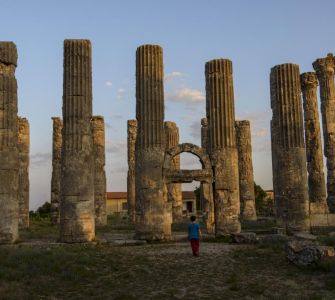 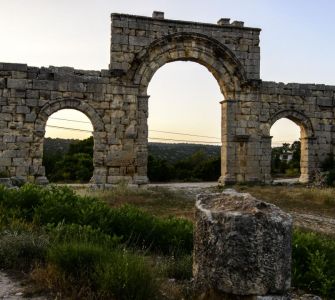 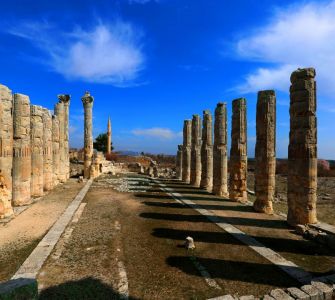 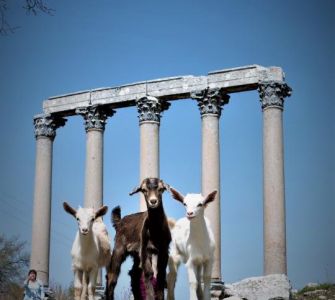