The 3 km long ancient road in the Sağlıklı neighborhood of Tarsus is one of the important roads of the Roman Empire period, which can be considered as the highway of that period. The Sağlıklı Roman Road is the most important route that stretches north from the hills to the Taurus Mountains and connects the Mediterranean to Central Anatolia via the Gülek Strait. When you reach here, it is possible to see Çukurova and the Mediterranean in one direction and the high Taurus Mountains in the other direction in clear weather.

One of the biggest secrets of the success of the Romans, who ruled huge geographies for a very long time, is the roads they built. In the heyday of the Romans, the total length of all their roads was 85,000 km. Thanks to these roads, the empire was able to move legions from one place to another very quickly, keeping the entire empire under control. These roads, which were generally built for horse-drawn carriages, were also of great importance for trade and communication.

Although limestones are generally used on the Sağlıklı Roman Road, the road progressed over the bedrock where the ground was suitable. In some parts of the road, which is 3 m wide, there are widening points for the cars to pass easily. Curbstones were used on the sides to prevent cars from going off the road.

It is known that the road, which is estimated to have been built in the 1st century AD, was actively used until the 5th century. The fact that this 2,000-year-old road has survived to the present day shows the mastery of the Romans in road construction.

It is known that one of the most important figures of Christianity, St. Paul of Tarsus, used this way in some of his travels to spread the religion. A Latin inscription on the northern end of the road states that the road was repaired during the reign of Emperor Caracalla (198-217).

The most striking artifact on the Roman road is the Arc de Triomphe. This structure, which is thought to be the border gate of Cilicia, was built in the 5th century. The arch height is 5.2 meters and the width is 8.8 meters, and the depth of the door is around 1 meter. The structure, which was recently damaged by the explosion of dynamite in the nearby limestone quarries, has been restored.

The Roman Road is within the borders of the Sağlıklı District of the Tarsus District of Mersin, 20 km from Tarsus and 49 km from Mersin.

The shortest way to go from Mersin to the Sağlıklı Roman road is to reach the Old Ankara road by using the highway or the d400 road.

Entry to the Sağlıklı Roman Way is free.

Places to be seen around Sağlıklı Roman Road

Distance of Sağlıklı Roman Road to center of  Tarsus is 20 km. At the center of Tarsus  When you reach center of  Tarsus, Makam Mosque,  Ulu Mosque, Kırkkaşık Bedesten , Kubatpaşa Madrasah, Saint Paul Church,  Cleopatra Gate, Tarsus Museum, Ancient Roman Road, St. Paul's Well,  and Old Tarsus Houses  are all within walking distance. Our advice to visitors who come Tarsus  by private vehicle, to leave their vehicles in a suitable place and visit all these points on foot. They will have had a pleasant time full of history from the ancient period  to Turkish Republic. 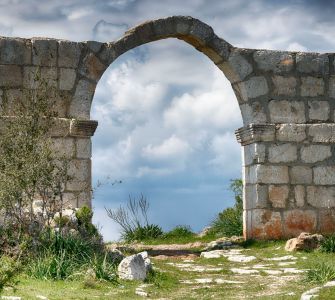