The Ancient City of Olba is located in the Silifke district of Mersin and is the capital of the Olba Kingdom, which ruled in antiquity. Located at an altitude of 1040 meters from the sea, this city is in a strategic position at the intersection of roads coming from the sea. In the city, it is possible to find artifacts related to the Olba Temple State, the Hellenistic period and the Roman Empire, as well as the Christian period.

Like many settlements in ancient times, the city has an acropolis (fortress for protection). The height of the hill where the acropolis is located is about 50 meters from the plain, and this elevation has the appearance of a natural castle, as well as a rocky structure that provides natural protection.

The most important artifact still standing from the Ancient City of Olba is the ancient fountain from the Roman Empire period and the aqueducts that bring water to the city from the Lamas River. On the aqueduct, "City of Olba People" is written.

The Olba Kingdom is a temple state dating back to the pre-Hellenistic period. To briefly mention the temple state structure, it is a management style in which all property belongs to the temple. Priest kings are both religious leaders and state administrators, and the number of slave workers determines the power of the kingdom due to the economy based on agriculture.

Kingdom of Olba, starting from the 4th century BC, ruled especially in the Mountainous Cilicia region between the Lamas (Lemonlu) and Göksu rivers. Subsequently, it continued to exist as a semi-independent kingdom under the sovereignty of the Seleucid Empire, which was founded by Seleukos I, one of the commanders of Alexander the Great. At this stage, during the Seleukos period, who also founded the city of Silifke and gave its name to the city, they were influenced by the Greek Gods and transformed their temples into the temple of Zeus. While the Seleucids established Greek police states in areas of land that are fertile for agriculture and in places with ports, they left the administration to semi-independent rulers in rugged and less suitable areas for agriculture. In this way, the Olba Kingdom was able to continue its rule.

Due to the mountainous and difficult geographical structure of the region, the pirates seized power over time, and when the Roman Empire declared war on piracy, the commander Pompeius established order in the region in 67 BC. From this period, the Olba Kingdom continued its sovereignty as an autonomous city-state affiliated to the Roman Empire.

Especially foreign researchers have been talking about Olba since the end of the 19th century. In this area, there are many ruins from the Hellenistic, Roman and Christian periods. The team led by A. Emel ERTEN from Mersin University has been continuing the excavations for two periods, from 2001-2009 and 2010 to the present.

As a result of the excavations, works such as the cult of the dead, the acropolis, the theater and the monastery were unearthed. One of the most important artifacts found here is the floor mosaics, known as the Olba Mosaic, with portraits of men and women and two-winged angels, whose photographs are featured on our website. Selected as Turkey's most important archaeological discovery in 2015, this 1800-year-old mosaic is exhibited in sixteen plates in the garden of the Silifke Museum Directorate.

Where is Olba Ancient City? Directions Information. How to get to  the ancient city?

Olba Ancient City is located within the borders of Örenköy District of Silifke. It is 32 km from Silifke and 100 km from Mersin.

To go from Mersin to Olba Ancient City by private car, you should proceed west on Mersin-Antalya highway then you should turn right, in the direction of the signs on the town of Kızkalesi and by passing the villages of Hüseyinler, Cambazlı and Yeğinli, respectively you can reach the city. If you choose this road, you will have the opportunity to see the Adamkayalar and Cambazlı Church on the road.

To go from Silifke to the Ancient City of Olba, by turning north from the district center, passing the villages of Demircili, İmamlı, Keşli Türkmenli and Uzuncaburç, and then turning right you can reach the ancient city.

You can use the Uzuncaburç minibuses that depart from Silifke Central Monument Square 3 times a day to reach the Ancient City of Olba by public transport.

The entrance fee of the ancient city of Olba is 12.5 TL and the Museum Card is valid.

Places to be seen around Ancient City of Olba 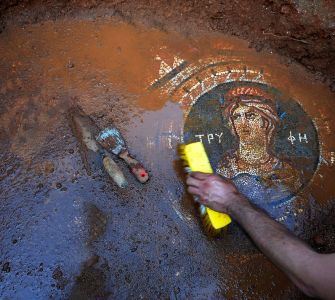