The Ancient City of Aphrodisias is an old port city, which means "Dedicated to Aphrodite", the Greek Goddess. It was also called Aphrodisias of Cilicia in order to distinguish it from the city of the same name in Aydın. First, the Greek Colonies dominated here, and then the Hellenic Ptolemaic Kingdom, which captured the south of Anatolia for a while, reigned. Afterwards, it was ruled by the Seleucids, which was also a Hellenic state. It was also mentioned among the important ports during the Roman period.

The isthmus (a narrow piece of land connecting a peninsula to the land) formation and the islands in the open, had the feature of a natural harbor in the city, and there were two harbors on the east and west sides of the isthmus. A small channel was opened between the ports for ships to pass through. Over time, the city was abandoned and forgotten due to the raids of Arab pirates.

The most important among the finds that have survived in Tisan is the remains of a basilica planned church from the Byzantine period. The mosaics of this church have survived to the present day and therefore it is also known as the Church with Mosaics. In addition to the plant and animal motifs on the mosaics, there is an inscription. According to this inscription, the name of the church is St. Pantelon Church. Not all of the mosaics and motifs have been exposed, and they are covered with sand for protection. To see the mosaic, it is necessary to clean the sand and open it.

The rediscovery of Tisan also has an interesting story. A colonel who flew over this place by helicopter during the Cyprus Peace Operation was impressed by the scenery and a cooperative established with his initiatives built the white villas here. The residents of Tisan are generally composed of civil servant families from Ankara. Since it is a protected area, there are no hotels etc. There are no facilities.

The feature that makes Tisan very famous and popular is its beaches rather than its history. Due to its isthmus structure, it has two beaches in the east and west. The beach in the east is stony, deepening quickly, but fascinates people with its clarity and color. This place is generally preferred by those who come to swim.

The beach in the west is sandy, gradually deepening, so it is mostly preferred by families with children and those who do not like crowds. The sea of Tisan is different with its different blue tone and clarity, as well as the abundance and diversity of sea creatures. Coming here with scuba glasses and snorkels will give the visitors a pleasant experience.

The bay, which was selected as the 13th cleanest bay in the world in 2006, owes this feature to the fact that it is relatively difficult to access and  also the currents clean these places. This bay is one of the main stops on boat tours departing from Taşucu, and boats take a swimming break in the open bays on the east side.

Where is Tisan? Directions Information. How to go to Tisan?

Tisan is located within the borders of Yeşilovacık Neighborhood of Silifke District of Mersin. It is 43 km from Silifke and 148 km from Mersin. To go from Mersin to Tisan, you should proceed west along the Mersin-Antalya highway and turn left (to the sea side) in Yeşilovacık Town. When you pass the small hill on the road, you will see Tisan with its magnificent view. We recommend you to  take a photo break here.

There is no way to reach Tisan by public transport.  During summer months boat tours departing from Taşucu and visiting Boğsak, Barbaros Bay, Dana Island and Tisan respectively are also a good option to see Tisan and other bays. 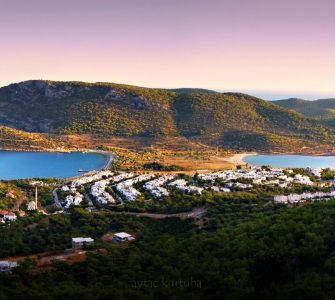 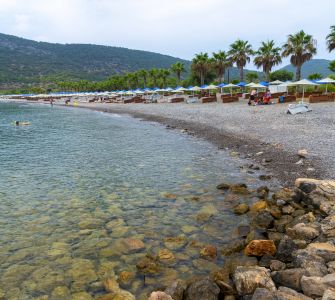