Atatürk, who visited Mersin eight times, made the longest of these visits between January 20 and February 2 in 1925 and stayed in this house with his wife Latife Hanım.

The house, which was built by the Greek-born merchant Konstantin Mavromati in 1897, was formerly known as the Krisman Mansion. The building, which changed hands due to the family's lack of heirs, served as Toros College between 1972 and 1976. The building, which was expropriated and restored in 1981, was put into service as Atatürk's house on October 12, 1992.

Atatürk House Museum, the two-storey building located in a 1200 square meter garden, is a work made of cut stone and reflects the architectural features of its period very well. In the previous periods, 3 shops on the ground floor were converted into a conference hall during restoration.

2 of the 4 doors on the ground floor open to the garden. The landscaping of the garden was carried out very successfully. The traces of structures such as baths, etc., belonging to the past period in the garden have disappeared today. The decorations and embroidery on the ceilings are remarkable. The columns of the balconies are reminiscent of antiquity.

Various documents, especially photographs of Atatürk's visits to Mersin, are exhibited on the ground floor. Again, on one wall of the entrance, there are pictures of the heroic National Forces from Mersin.

On the 7-rooms at the upper floor of the building, household items brought from ethnography museums in cities such as Ankara, Konya, Sivas and Tokat and some items used by Atatürk in this house are exhibited.

Some of the items from that period on display in the museum include a watch, sugar bowl, cup, samovar, candlestick cover, carpet, cup, as well as personal items such as bathrobes and shirts.

Where is Atatürk House Museum? Directions Information. How to Get to the Museum?

Mersin Atatürk House Museum is on Atatürk Street, one of the most central points of Mersin. To reach here by private car, you can park your car around Atatürk Park after driving along the coastal road (İsmet İnönü Boulevard) in Akdeniz District and then reach the museum with a short walk.

Since almost all of the city transportation vehicles pass near this place, you can easily use public transportation to reach the Atatürk House Museum.

What is the Entrance Fee to Atatürk House Museum? On which days and hours is it open to visitors?

There is no entrance fee to Mersin Atatürk House Museum.

Atatürk House Museum is open to visitors every day of the week, except Sunday, between 09:00 and 16:30.

Places to be seen around Mersin Atatürk Museum 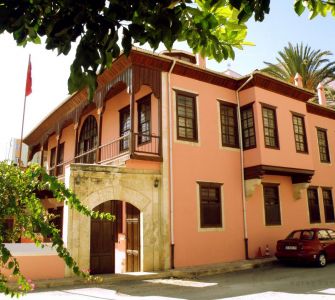