Cleopatra's Gate is the only surviving structure from the old Tarsus walls. Tarsus was the capital of Cilicia and also one of the most important centers of ancient times with its ten thousand years of history. It was protected by walls like other important cities. The entrance and exit to the city were provided through 3 gates, namely Deniz Kapı (Sea Gate), Dağ Kapı (Mountain Gate) and Adana Kapı (Adana Gate). When the Egyptian Governor Kavalalı Mehmet Ali Pasha rebelled against the Ottoman Empire and advanced to Anatolia, his son İbrahim Pasha was given the governorship of Syria and Adana. İbrahim Pasha had the Adana and Tarsus walls demolished during his governorship of Adana between years 1832-1840. Only the Sea Gate, known today as the Cleopatra Gate, remains.

The Cleopatra Gate is 6.17 meters high and 6.18 meters deep, with a single arch in the shape of a horseshoe. Cut stone and Khorasan mortar were used in its construction. When the construction technique and materials are examined, it is concluded that it was built during the Byzantine Empire. However, it is estimated that this door was built over an older door.

While Tarsus was a very important center during the Roman Empire, the path of many important and famous names passed here. After the death of Emperor Caesar, who came to Tarsus in 47 BC, in Rome, Mark Antony, responsible for the eastern provinces of the empire in the triple administrative system, came to Tarsus and invited the Egyptian Queen Cleopatra, with whom they had a great love. After Cleopatra came to Regma lagoon by ship, she entered Tarsus through this gate and the gate began to be called by her own name. Evliya Çelebi, who also went to Tarsus in the following dates, referred to this gate as the "Pier Gate" in his travel book.

Where is Cleopatra's Gate? Directions Information. How to Get to the Gate?

Cleopatra Gate is in the most central position of Tarsus District of Mersin. It is the most used point even for address directions. The distance from Cleopatra Gate to Mersin is 25 km.

Mersin-Adana highway (d400) can be used to go from Mersin to Cleopatra Gate. After reaching the center of Tarsus, proceed along İsmet Paşa Boulevard and you will see the Cleopatra Gate.

To go to Cleopatra Gate by public transport, after reaching Tarsus by bus or train, you can reach very close to the gate by minibuses departing from the train station or bus station. 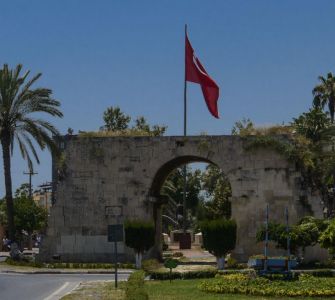 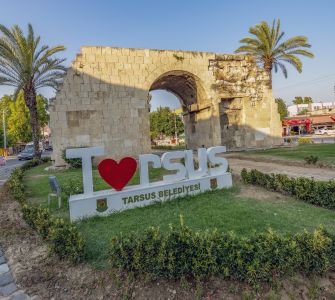