Adamkayalar (“adam” means men and “kaya” means “rock” in Turkish meaning man-rocks) is a place consisting of reliefs and figures made on the slopes of the Şeytan Deresi Canyon, in a strategic position overlooking Kızkalesi in Mersin. In terms of size, workmanship and story, it is a rare value not only in Turkey but all over the world. Archaeologists think that the people depicted on the reliefs represent the kings and queens of the Ancient State of Olba and the purpose of these was to commemorate the dead.

There are 19 figures in 9 niches (cavities) in Adamkayalar. These 19 figures consist of 11 men, 4 women, 2 children, 1 mountain goat and 1 eagle. These reliefs depict various scenes in a story-telling manner. Each of the figures, such as the soldier's farewell scene, the ritual scene, the dead feast scene, the scene where a man holds a bunch of grapes in one hand and holds a goat by the horns with the other, has a different story.

In one of the reliefs, a figure is depicted pouring a liquid from the jug in his left hand into the bowl in the other hand, and this depiction gives us information about the presentation of liquid, which is among the ancient burial traditions.

Thanks to the relatively difficult transportation, Adamkayalar, which has been very well preserved until recently, was destroyed by some treasure hunters in 2015. However, it is known that people of that period made their graves in other places that no one knows against the risk of theft, so it is stated that there will not be any objects of material value for treasure hunters in Adamkayalar.

The canyon, on the slope of Adamkayalar, is called the Şeytan Deresi Canyon by the local people (“şeytan” means “devil” and “dere” means “creek” in Turkish. This canyon, which extends from the ancient city of Olba to Kızkalesi and where the dried up Kazıdere flows, is one of the most impressive in terms of scenery and feeling among the many canyons in Mersin. Due to the calcareous structure of the region, the place where the Şeytan Deresi flows is curved as a white trail and this creek has formed the border of Silifke and Erdemli for a long time. When you come to the edge of the canyon to descend to Adamkayalar, you will see that the canyon extends from this point to Kızkalesi and you will be impressed when you see the 90 degree steep slopes in some places along with the sea view. Perhaps you will think that the ancient people, influenced by the scenery, built these masterpieces on the slopes of the Şeytan Deresi.

Adamkayalar is located within the borders of Hüseyinler Village, Erdemli District of Mersin. Adamkayalar is 27 km from Erdemli and 70 km from Mersin.

To get to Adamkayalar first you should go 5 km in the direction indicated by the signs in Kızkalesi Town,  later you should proceed for 2 km in the direction of the Adamkayalar sign on the left. Here, after parking the vehicle at the end of the road, following the arrows marked with red paint on the stones, you reach the Adamkayalar Relief with a walk of approximately 100 meters. Even though you have to proceed a little carefully, especially in this 100 meters, you realize that the view seen when you descend carefully will be worth all the effort.

When you go to Adamkayalar, it will be beneficial to choose especially morning or afternoon hours, both to avoid the heat and to take photos with a better quality light.

Admission to Adamkayalar is free.

Places to be seen around Adamkayalar 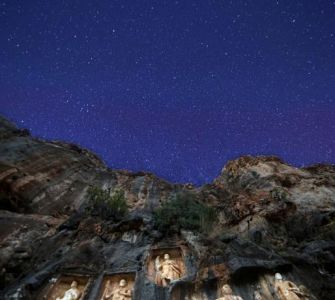 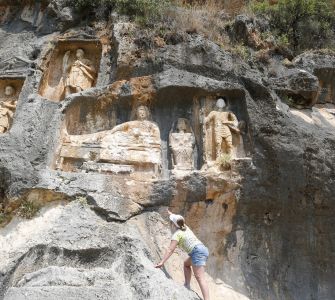 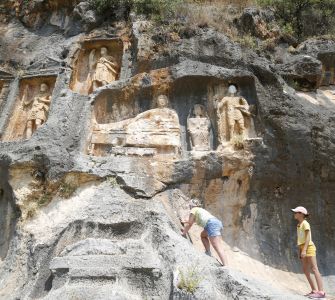 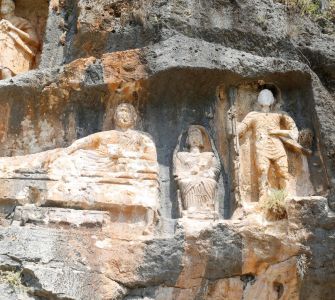