Taşkuyu Cave is a dripstone cave that was discovered by chance in Tarsus very recently and brought to tourism. The length of the discovered part of the cave is 470 meters

Like other dripstone caves, it is formed as a result of the precipitation of limestone in the underground waters leaking and dripping from the ceiling of large underground cavities, on the ceiling and floor of these cavities. . There are cave pearls, which are formed as a result of the water dripping in the pools in the cave, losing carbon dioxide and precipitating lime, and which are very rare in nature. When the light is shed on the cave, it is seen that everywhere shines like phosphorus.

The galleries in Taşkuyu Cave, which consists of interconnected galleries, are given the names of 7 young people (Yemliha, Mekselina, Mesina, Mernuş, Debernuş, Sezanuş, Kafetatayyus) in the story of Eshabı Kehf, another important cave located very close to each other. The height of the gallery reaches 10 meters in some places. The mystical music played while walking through the cave strengthens the sense of different atmosphere felt by the visitors.

The height of the cave is 214 meters from the sea, and because it is close to the surface, the temperature varies between 19-24 degrees. No living creatures or remains were found in the cave. .

The Story of Taşkuyu Cave

Taşkuyu Cave was discovered by chance in 2006 while road works were being carried out in Tarsus. When it was first found, it was possible to enter the cave under very difficult conditions through its small entrance with a diameter of 1 meter. Afterwards, with the support of Çukurova Development Agency, the Taşkuyu Cave was opened to tourism at the end of 2014, with the construction of the  lighting, walking path, guardrails, and camera system.

Where is Taşkuyu Cave? Directions Information. How to Get to the Cave?

There is no entrance fee for Taşkuyu Cave. Parking is also free.

Places to be seen around Taşkuyu Cave

Distance of Taşkuyu Cave to Tarsus  city centre is  14 km. When you reach Tarsus city centre all historical places listed as respectively,  Makam Mosque,  Ulu Mosque, Kırkkaşık Bedesten , Kubatpaşa Madrasah, Saint Paul Church,  Cleopatra Gate, Tarsus Museum, Ancient Roman Road, St. Paul's Well,  and Old Tarsus Houses  are all within walking distance. Our advice to visitors who come Tarsus  by private vehicle, to leave their vehicles in a suitable place and visit all these points on foot. They will have had a pleasant time full of history from the ancient period  to Turkish Republic. 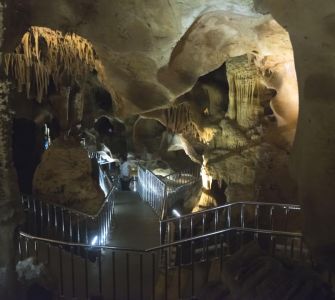 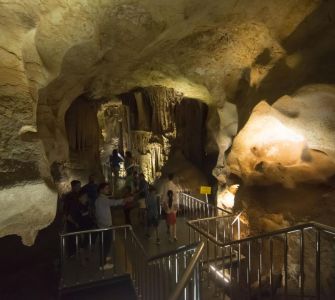