Narlıkuyu Mosaic Museum is located on a 4th century Roman bath. Narlıkuyu, which was a small port at that time and known as Porto Colamie, was the point where those who came to worship in Heaven and Hell and the surrounding temples landed. Visitors would reach here by sea and get ready for worship by bathing in the bath here and being baptized. Before visiting holy places, bathing in this bath had become a religious ritual.

Poimenos, who was the ruler of the Prince Islands (Buyukada, Kinaliada, Heybeliada) in the Eastern Roman Empire and a close friend of the emperor, had this bath built in the 4th century. A faint sound of water is heard at the bottom of the Heaven Pitcher. This is the holy river, which is referred to as the River Styx in ancient sources and which separates the earth from the realm of the dead. While the bath was being built, it was desired to benefit from the healing properties of this water flowing into the sea in Narlıkuyu. Until recently, this water could be drunk through a well with a pump.

The museum was founded on the mosaic that forms the floor of the bath. There used to be a cafe on the place where the museum is located today. In this way, the mosaic should have survived intact. Today's museum was established in place of the coffeehouse, with the information of a conscious citizen to the competent authorities.

Narlıkuyu Museum consists of two parts. At the entrance, there is the water trough of the bath on the right, and the mosaics on the left.

With its story and visuality, the Üç Güzeller Mosaic is one of the most important and must-see works in Narlıkuyu and its surroundings.

The inscription on the upper edge of the mosaic reads: “O guest friend, if you want to know who discovered and unearthed this beautiful water that was hidden until now; know that he is the honorable Poimenios, who made friends with the emperors, who was their friend, who ruled the holy islands.”

On the mosaic, the daughters of the chief god Zeus, Aglaia, Euphrosyne and Thalia, are depicted dancing among the doves and partridges.

Aglaie represents brilliance, Euphrosyne represents joy, joy and beauty, and Thalia represents radiance and the energy of plants. It is believed that these beauties, who dance to the accompaniment of music and bring joy in the environments they enter, bring joy to life and enjoy life, and that the features of these beauties come to life in the people of the region today.

Where is Narlıkuyu Mosaic Museum? Directions Information. How to Get to the Museum?

Narlıkuyu Mosaic Museum is at the entrance of Narlıkuyu bay in Silifke District of Mersin. Its distance to Silifke is 20 km, and its distance to Mersin is 68 km.

The entrance fee to the Narlıkuyu Mosaic Museum is 12.5 TL, and the Müzekart is valid.

Places to be seen around Narlıkuyu Mosaic Museum 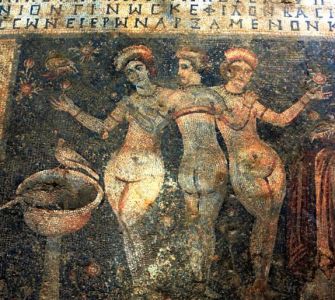