Kosekbuku Cave is one of the most beautiful caves of Anamur and Mersin. It is thought that the cave, whose history does not go far, was formed in the third geological time. The intense karst structure in the Central and Western Taurus Mountains has caused such cave formations. Karst lands are easily soluble rocks that are not resistant to abrasion. Underground and surface waters dissolve these areas, forming cave-like erosion and deposition forms such as stalactites, stalagmites and columns. Therefore, there are many caves in the Anamur region such as Adamdaş, Üğü, Buğu, Bicikli, Kazıklar, Dede caves, most of which have not yet been brought into tourism.

Kosekbuku Cave has also been brought into tourism in the very recent past. It was a cave that was known among the public until 15 years ago, but can be visited in a dangerous and uncomfortable way with illuminating equipment such as burning kindling and lantern. Over time, with the efforts of various public institutions, the cave was illuminated by drawing electricity, and walking paths and bridges were built to ensure a comfortable and safe walk through the cave. While the road that provides access to the cave is a narrow path in the forest, it has been expanded over time and it has been possible to reach the cave with a pleasant journey.

Kosekbuku Cave consists of 3 main parts called Wish, Healing and Peace. The cave is also known as Asthma Cave, as the air inside is thought to be good for asthma patients. According to the rumor, Anna, the asthmatic daughter of Roman Emperor Antiochus, stayed in this cave for a while and regained her health. Local people believe that the elements filtered from the rocks inside the cave with water drops mix into the air and gain healing properties for asthma patients.

The cave is entered through a 2 meter rock crack towards the bottom of the ground. The stalactites formed by the dripping waters and the stalagmites formed by the accumulation of these waters on the ground are interesting. Cave lighting has been successfully established by illuminating different buildings in different colors.

At the entrance of the cave, there is an establishment where you can try local food sıkma and beverages, ayran and tea, and an area where local products are sold.

We recommend you to buy the Washington variety orange, which has gained a reputation throughout Turkey with its flavor and juicy structure, grown in Ovabaşı Village while you go to the Kosekbuku Cave.

The Story of Kosekbuku Cave

The story of the origin of the name of the Kosekbuku Cave is also related to the nomadic culture. In the old language, the camel cub is called "Köşek", and the bush and thorny roads that are difficult to pass are called "bend". Local people use camels as a means of transportation when nomadic nomads go to the highlands in summer. In another migration period, a camel's labor pains caught on the winding roads near the cave. The camel and its owner stayed behind from the tribe and took shelter in a hollow when it rained. When the rain continued for a long time, the owner of the camel, while waiting, examined the inside of the hollow and discovered the cave.

Where is Koskbuku Cave? Directions Information. How to Get to the Cave?

Kosekbuku Cave is located in Ovabaşı village of Anamur District of Mersin. Its distance to Anamur is 10 km, and the distance to Mersin is 241 km.

In order to go to the Kocekbuku Cave from Mersin by private car, you should proceed west along the Mersin-Antalya Highway and after reaching the Anamur District center, turn right with the direction of the signs in the district. After passing the village of Ovabaşı, you will see the cave within walking distance.

There is no public transport access to the Kosekbuku Cave.

The entrance fee to Kosekbuku Cave is 5 TL. The museum card is not valid.

Places to be seen around Köşekbükü Cave 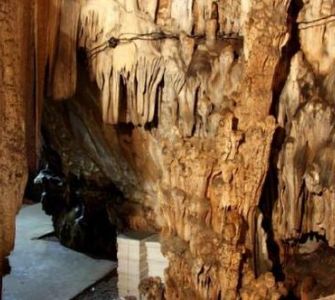