Astım Cave is one of the most beautiful caves in Mersin. The name of the cave comes from the belief that it is good for asthma patients. The cave is reached by a spiral staircase with 78 steps. As soon as you land, the cool and humid air hits your face and you feel that you have come to a different world. The giant stalactites and stalagmites inside the cave are impressively beautiful. The depth of the cave, which consists of 3 sections, is 15 meters and its length is 200 meters. Visitors can wander around the cave by following a circular path.

We recommend that those who will visit the cave pay attention to the slippery floor.

The Story & Legend of Astim Cave

Astim Cave has been believed by the local people for years to be good for asthma and is a healing cave. According to another rumor, it is believed that the wishes of those who stick the mud they throw in the cave on the ceiling will be granted. Because of this harmful belief, many spots in the cave are covered with mud stains. Because of this belief, the cave is also called Dilek (Dilek means wish in Turkish) Cave. There is also a belief that the wishes of those who tie cloth to the trees around the cave will be granted.

Since ancient times, it is believed that the Asthma Cave is good for asthma. The air inside the cave does not contain pollen, dust, chemical pollution, etc. So it is thought that asthma patients can breathe comfortably here.

Humidity in Astım Cave is 95 percent in summer and 85 percent in winter, and the air temperature is around 15 degrees in summer and winter. In summer, especially at noon, the cooling sensation experienced when descending into the cave is very pleasant.

Where is Astım Cave? Directions Information. How to Get to the Cave?

Astım Cave is located in Mersin's Silifke District. It is 23 km from Silifke and 85 km from Mersin.

To get to Astim Cave from Mersin, proceed west along the Mersin-Antalya highway and after passing the Kızkalesi town, proceed for about 3 km. After climbing 2 km, you can reach the Astım Cave on the right, in the direction indicated by the citizens of Astım Cave and Heaven and Hell Potholes.

There is no means of public transportation to reach Astım Cave. After getting off on the main road by Silifke minibuses or intercity bus, it is necessary to reach the cave by a private vehicle.

The entrance fee to Astim Cave is 45 TL. Museum card is valid. With the ticket purchased from here, you can also visit the Heaven and Hell Potholes.

We recommend those who go to Astım Cave to experience the Yörük breakfast, which includes varieties that you cannot taste elsewhere, such as citrus jam, raw fig jam, offered at the businesses located around the cave. Also sıkma which is also a local food, and to cool off drink buttermilk, which is a very famous here.

Places to be seen around Astım Cave: 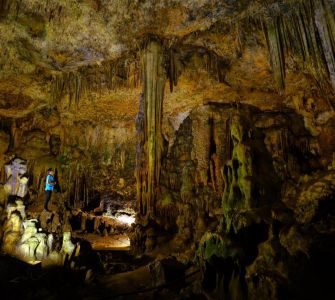 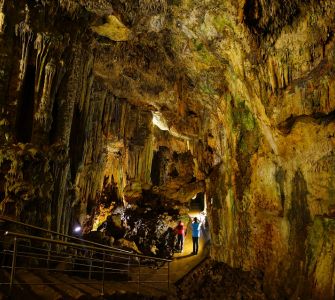 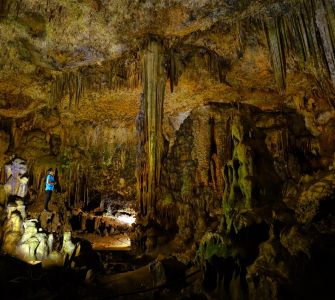